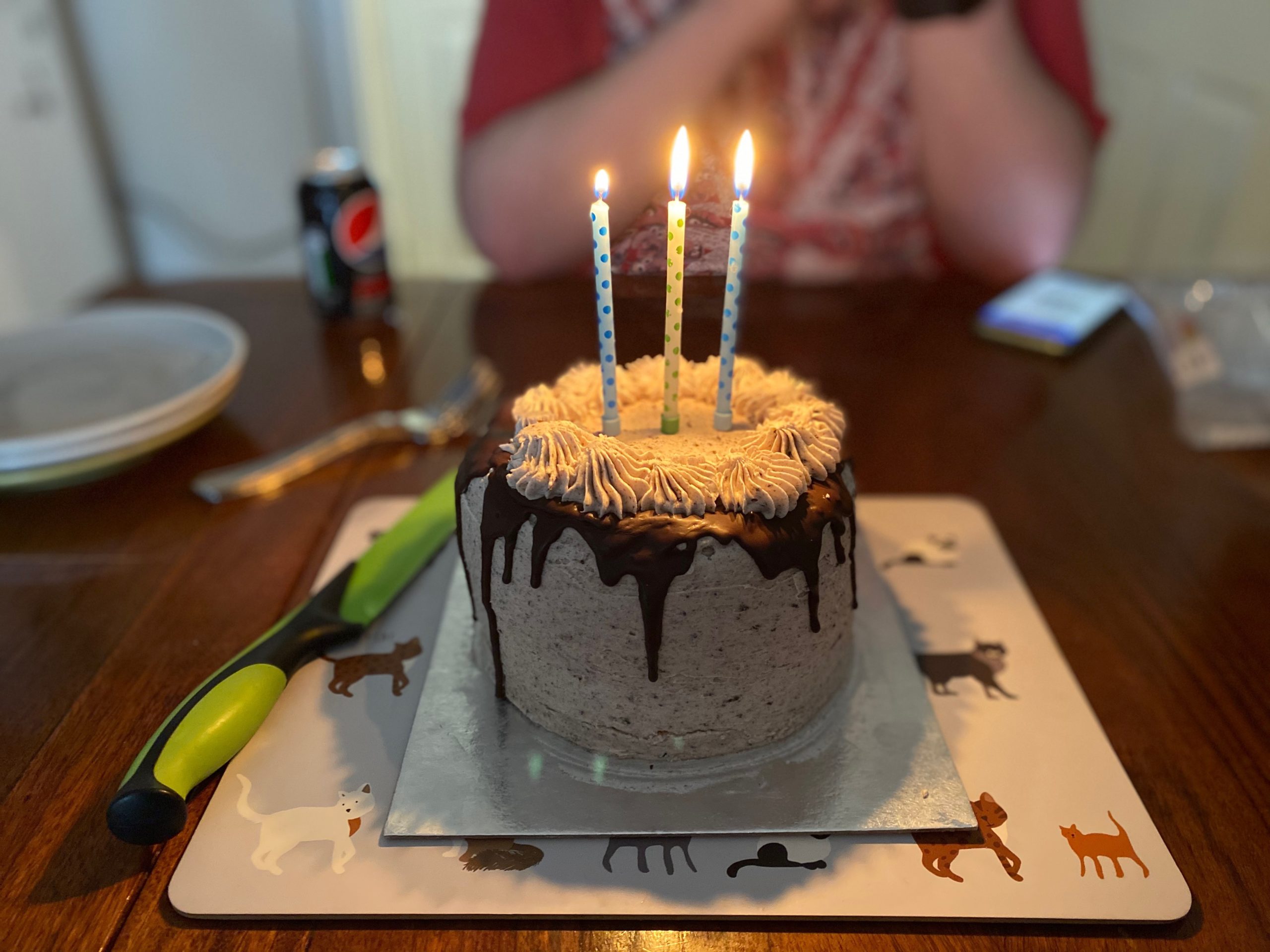 My recovery from Covid-19 is going well, the CPAP is helping a lot.

We also had Lindsay birthday today and we had a nice long weekend of doing stuff she enjoys taking into account my current limitations.

We watched The Fellowship of the Ring on Saturday, we had hoped to do all three films in one day, but my inability to go more than a few hours without having to have a nap put paid to that.

Today we had planned to have a BBQ over FaceTime with Lindsays sister Jane, her boyfriend Rob and her three sons, Willem, Brandon and Jonah, because Lindsay would have lived nothing more than to see her nephews and nieces, siblings and grandad today.

But the weather was not good for Jane and Rob so we are doing that on Wednesday but we still had our BBQ food for lunch, only because it was so cold Lindsay and Megan insisted on doing it in the oven because I wasn’t well enough to use the grill.

Our afternoon plans were changed because Willem developed a temperature which put Jane into quarantine and prevented her getting shopping so Lindsay had to rush out and grab some essentials she needed.

So it’s been a bit of a funny day, but we will do something nice to celebrate when the crisis is over.

I finally wiped my PCs hard drive and reinstalled Windows 10, after putting it off for ages.

There were a few little juggling issues with it, VLC refused to load at all, a friend had logged into their iCloud Music Library which meant I couldn’t play any music from mine for 90 days and in general it was running a bit slow.

So I wiped my SSD and reinstalled Windows, and upgraded to Office 2019, Lindsay keeps saying she wants to get Office 365, but I admit I am a bit unsure about software I need to subscribe to use, hence why I still use Adobe CS6 instead of Creative Cloud which is quite expensive for what I need.

I also took the time to install a few games, I don’t play enough games on my PC and I have a fair sized Steam library that I have expanded through the years thanks to Humble Bundle.

What Am I Modelling

Things have been slow, I am slowly getting myself able to sit at the desk for longer and longer periods without having to go back to bed.

I started off by finally finishing up some bits for Niki’s Death Korps of Krieg, specifically his Grenadiers with Heavy Stubber and Meltagun and a Death Riders Ridemaster.

And this was followed by the Quartermaster and a Retinue, these were a little intimidating as I wasn’t sure about how to approach them.

I then turned to some Nighthaunts for myself and painted three sets of Myrmourn Banshees, and at the same time as painting those I also painted the Tomb Banshee and Briar Queen as they both use a similar colour scheme.

I made a change to my painting plan at this point and slotted in the models for a Stormcast Eternals Vanguard Chamber Warcry warband, so that’s some Vanguard Rapters with Hurricane Crossbows, Aetherwings, Vanguard Hunters, and some Gryph Hounds.

So I started by priming them all obviously, the Stormcast with Macragge Blue, half the Gryph Hounds in Grey Seer and the other half and the Aetherwings in Mechanicus Standard Grey, I also had the Gryph Hound from the Easy to Build Castigators already primed in Black.

I also stupidly decided to complete my Edge of Empire hobby pledge and started painting a Predator for my Heresy Death Guard.

Sunday I was able to sit at my desk for three hours, the longest in nearly two weeks, it felt good to have a long undisturbed session of painting.

Getting more and more able to do stuff everyday, ok pain is hard because the antibiotics require me to be off quite a few of my painkillers. But I managed to sit down at my desk for the longest time in nearly two weeks and found myself painting a few bits and bobs. Done Aetherwings for Warcry and a Predator for my Heresy Death Guard. #IsolationHobby #Warmongers #WarhammerCommunity

It allowed me to get the Aetherwings to the stage of having the feathers washed and the tree trunks dove, and the Predator to the point that the hill colours were complete.

And Monday I got them competed, the Predator first.

And then finished off the Aetherwings.

Now on my desk are 6 Gryph-Hounds and the single Gryph-Hound from the Easy to Build Castigators.

My painting plan has changed slightly, due to what I have built I have taken the Chainrasps out of the plan and replaced them with the Glaivewraith Stalkers I have built and the Thorns of the Briar Queen.

I am still making my way through Tales from the Crucible, it’s hard going because the app is so utterly dreadful on my phone.

On Sunday we played a couple of games, we started with Alhambra, the first time we played with the Designers Edition Mega Box, and it was a lot of fun, although I came last and Megan won by a country mile.

Then we played a shirt game of Blank, which Lindsay won despite being forced to mime for the whole game!

Played a couple of games today, Alhambra which Megan won by a country mile, and Blank which was won by Lindsay

What I Am Backing

I backed the Forgotten Chambers project for some Purity Seals and Parchment transfers, which I think will be brilliant for my Sisters of Battle.

It’s down to ship in June, but given the Covid-19 crisis, I don’t expect it to ship until much later as printers are not an essential business.

What I Am Cooking

I did cook something, a sausage stir fry for lunch on Sunday, it was quite nice and is a real comfort food for me.

It’s something my dad used to cook to cheer me up, but his usually had bacon lardons in and used a pack of savoury rice. I didn’t have lardons, and I am hardly gonna send Lindsay it Megan out for them in this crisis, and I used microwave rice instead of savoury rice.

What I Am Spending

I needed some paint so I hit up Jus at Battle Bunker and got a Rukkatruck Squigbuggy at the same time, which means me and Megan have all six Ork buggies to paint up at some point.

Some stuff I had ordered from Element Games was finally delivered, on Easter Monday, which is weird, but I got some Azyrite Ruins, Baleful Realmgates and Nurgle Daemon Card’s for Warcry.

Never had post on a bank holiday before! But here is a parcel I ordered the other week from @elementgames_ and I am@happy to have these bits for my Age of Sigmar terrain collection and some more Warcry cards. #WarhammerAgeofSigmar #Warmongers #WarhammerAoS #AoS #AgeOfSigmar #Warcry #BalefulRealmgates #AzyriteRuins #MaggotkinOfNurgle #ElementGames #IsolationHobby