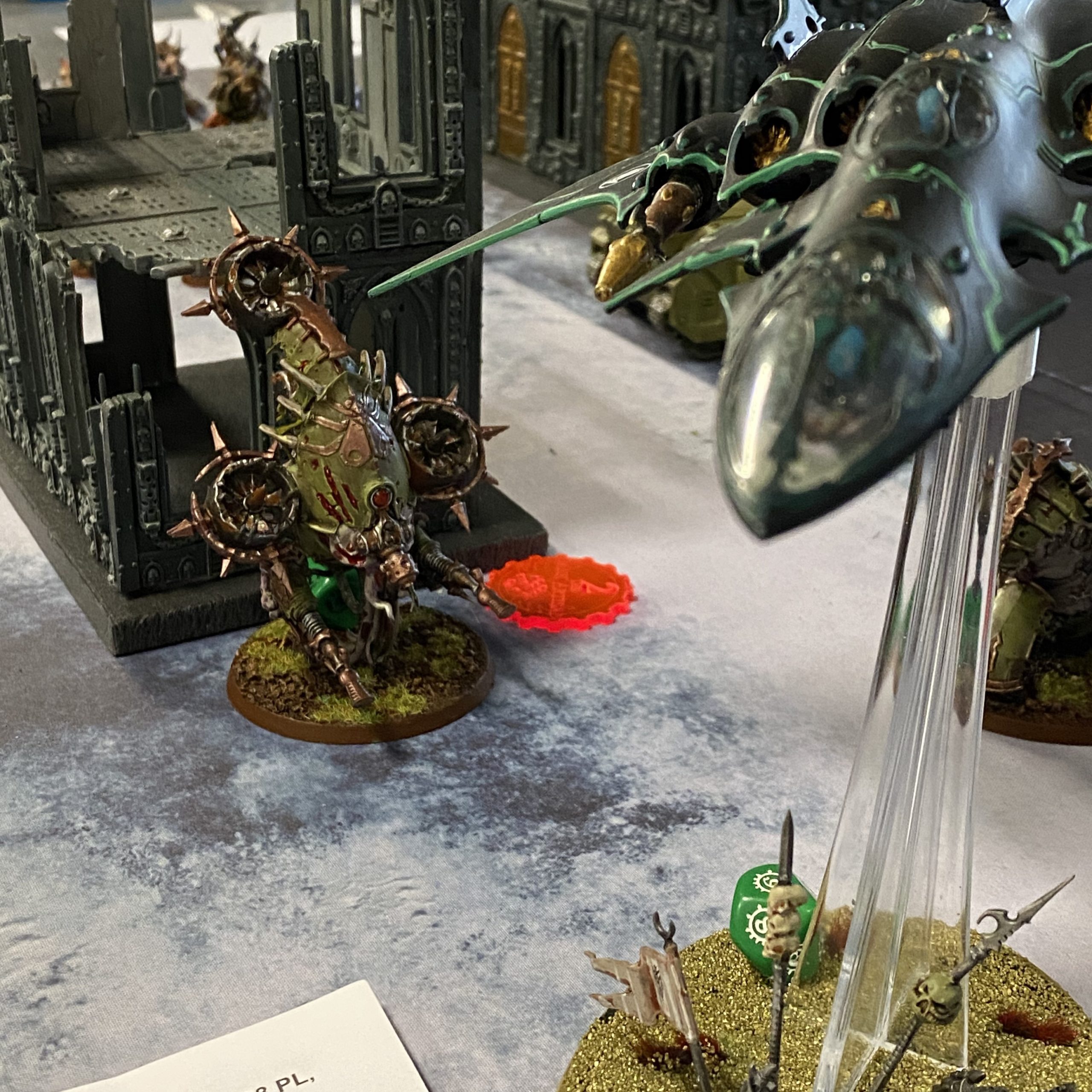 I Played In A Tournament

I wasn’t expecting to play, but sadly I was unable to make a previously planned trip to Edinburgh for medical reasons, so I ended up playing in The Dark Artisans Winter Warmup tournament for Warhammer 40k.

It was three rounds and in my first game I played Tyranids, and lost very badly, my opponent seized the initiative and was able to badly cripple my heavy hitters before they had a chance to do any damage to him.

My second game was against Drukahri and that was closer, but I still lost, the invulnerable saves really made me work hard to kill anything.

My final game was a mixed one, my opponent said he got his list off the internet and it was entirely unpainted.

But that lad was canny so it was a good game, I won simply because whilst his list was powerful, he didn’t know how to use it.

It’s all stuff that came from Conquest, and I had no plan on how to use it, in fact for most of it, this was the first time it saw the table.

I probably need to get to know the army better, it I went just to have three fun games and in the end, that’s what I got and I am happy with that.

It’s been a so so week in terms of modelling, I started with some Necromunda doors that we will be using for my Zone Mortalis stuff, simple to do and these were done quite quickly.

Playing Warhammer 40k tomorrow seeing as I am not travelling to Scotland, taking my Death Guard, most of whom have never seen action in a game. Anyway my Icon Bearers were the same and I would rather everything other than vehicles and Poxwalkers be different, so I painted up this one from the Plague Marine kit today. Got the other six to do at some point though. #PaintibgWarhammer #PaintingWarhammer2020 #PaintingGamesWorkshop #Warhammer40000 #Warhammer40k #Chaos #Nurgle #HereticAstartes #DeathGuard #PlagueMarine #PlagueMarineIconBearer #Painthammer2020 @jewelknightjess

At the same time I finished off a squad of Death Korps of Krieg Engineers and a Hades Breaching Drill for Niki.

Engineers for Nikis Death Korps of Krieg done and dusted along with a Hades Breaching Drill. Been a slow week for painting for me, these pains are really bringing me down right now and getting in the way of me doing as much as I would like. #PaintingWarhammer #PaintingForgeWorld #PaintingWarhammer2020 #Warhammer40k #Warhammer40000 #AstraMilitarium #ImperialGuard #DeathKorpsofKrieg #DeathKorpsofKriegEngineers #HadesBreachingDrill #Painthammer2020 @jewelknightjess

And then finally I painted up a Heavy Support Squad for my Ultramarines, armed with Volkite Culverins. This is a squad that has sat in my to do box for over three years and it felt good to finally get them done.

I also this week built one of my Repressors for my Sisters of Battle, but that’s gonna need a lot of green stuff before I prime it, and I also built my second Javelin, but I need to grab some magnets for that.

Right now I am working on a Millitarium Tempestus Squad armed with Plasma Guns and their Taurox Prime, and I am also working on the Haemotrope Reactor I got with my last delivery of Warhammer 40,000 Conquest as a side project.

So what does that do to my painting plan then.

I have ready just over half of this list, the rest need priming before I can move forward with them.

What Am I Reading

I finished Requiem Infernal and it left me, quite confused, I am not sure what the ending was about but it was, different.

I have since started on Celestine The Living Saint by Andy Clark and I am enjoying that a lot, I am halfway through it now.

And I am still making my way through the Soul Wars audiobook.

Apart from the tournament I played in, I also played another game of Warhammer 40k, this was a 500pts game using the contents of Shaodowspear apart from the Captain and Librarian.

I played against some old school 1st edition metal Eldar, which were quite cool and I was throughly beaten!

It was nice to see the Vanguard in action, the Eliminators are amazing and the Supressors are surprisingly good, although I didn’t quite figure out how to use the Infiltrators right.

I am working on my Blood Ravens a lot at the minute, one of my 2020 hobby commitments is to complete them, and I aim to get the Phobos stuff out the way as I am not a fan of painting that armour.

The clubs games are jumping up to 750pts next week so for the next time I play I am thinking of this.

So just adding in a Reiver Squad and the Librarian bit keeping with the Phobos armoured theme.

What Am I Backing

It came to my attention as I heard they had some visa issues getting to PAX, so I ended up checking out the campaign and you know what, it kinda looks interesting, I doubt it will find, but I fancy joining the ride.

What I Am Cooking

I did attempt to cook, but it failed, I am still not doing so good on that front 🙁

What I Am Spending

I am not, I need to keep money for my trip to Nottingham for Graham’s birthday, but I did buy myself the Sisters of Battle dice, which are really really cool.

I did cave and buy a Contemptor Dreadnought for the Sons of Horus as well.

Welcome To The Mortal Realms