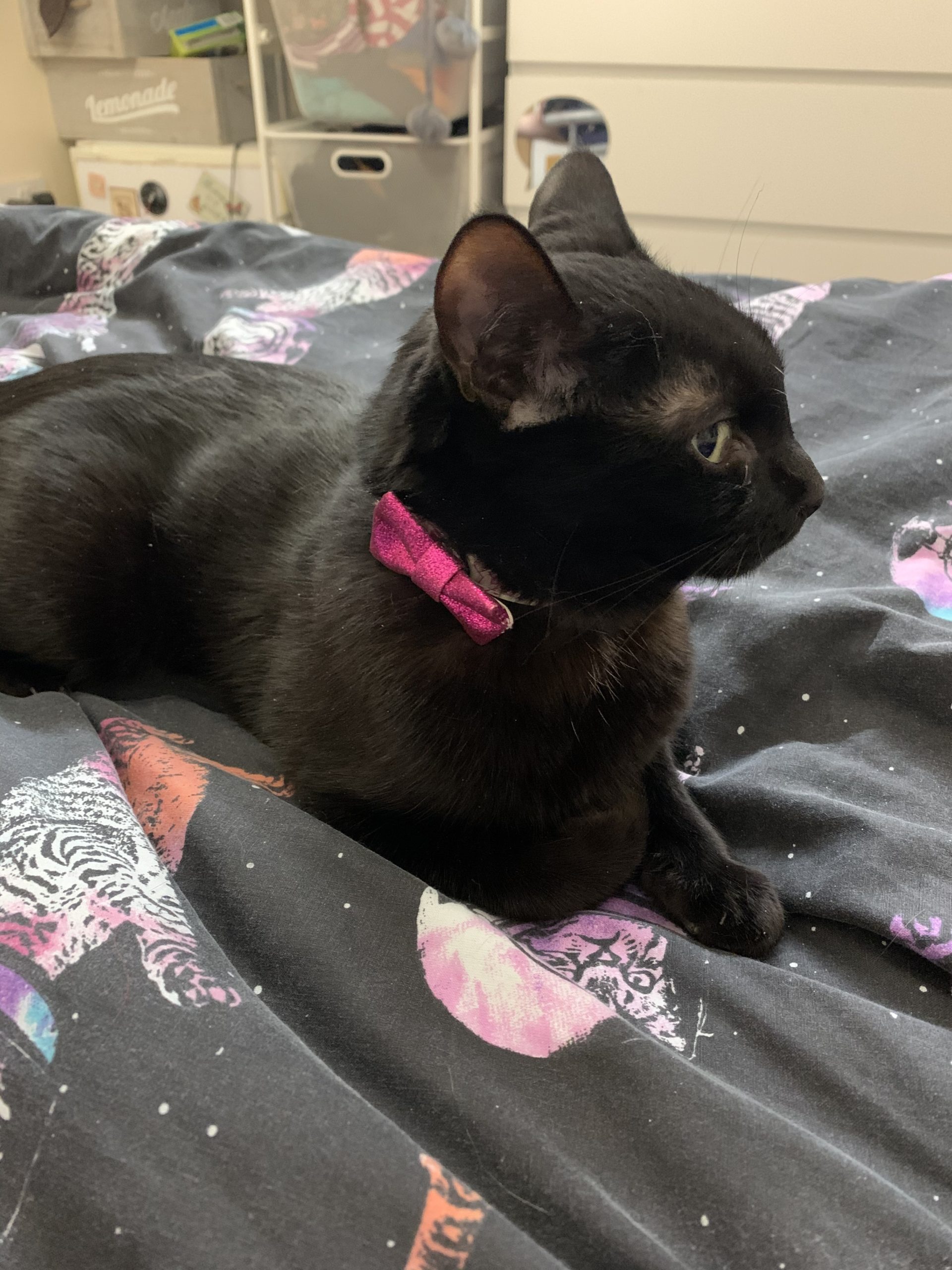 Since we lost Sweep and Cookie last year, the house has felt a little empty and when we found out we weren’t going to have to move, we decided that it was time to get another cat.

So we started looking around and after a few leads that didn’t pan out, Paul and Mary introduced us to Yarm Cat Rescue, and we saw a few cats in the group, two of which really caught our attention.

We asked which had been searching for a home the longest and we were told that this was Bonnie.

So we adopted her, she is a sweet girl, just 19 months old and is very loving and gentle.

She is taking a little time to settle in with Misty and Jenny, but that’s to be expected, but she loves to curl up next to you on the sofa and just get strokes.

I do love cats and they always make me feel happy, and I am very glad that we have been able to give a home to Bonnie.

Company of Legends is fast approaching and I need to get this new table finished for it as well as a couple of additions to another table.

So I started the week with two thirds of the Honoured Imperium set. The broken Aquila was missing the centre piece so I filled it in with some texture paint, assuming the gold that made it up had been whisked away somewhere to form a part of some nefarious ritual!

Working on a few bits and bobs for Company of Legends, here is two parts of the Honoured Imperium set I got from Chris. The Aquila was missing the central part so I filled it in with textured paint to try and show it’s been taken for some nefarious use elsewhere! #Warmongers #PaintingWarhammer2020 #PaintingWarhammer #PaintingGamesWorkshop #HonouredImperium #Warhammer40k #Warhammer30k #Warhammer40000 #Warhammer30000 #TheHorusHeresy #HorusHeresy #HardForHeresy #FullyPaintedIsForClosers #Painthammer2020 @jewelknightjess

I then painted up the second Galvanic Servohauler frame from Conquest, although this one I had gotten from Forbidden Planet as I was sick of waiting for Hachette to send it.

And then I worked with Megan to paint some Sector Imperialis Ruins, some from a box of them, some from Kill Team.

Myself and Megan worked on some Sector Imperialis Ruins for the new table for Company of Legends. Like with this table we added posters and blood splatter and made the working metal units rusty a bit too. #Warmongers #PaintingWarhammer2020 #PaintingWarhammer #PaintingGamesWorkshop #Warhammer30k #Warhammer40k #Warhammer40000 #Warhammer30000 #TheHorusHeresy #HorusHeresy #SectorImperialis #SectorImperialisRuins #HardForHeresy #FullyPaintedIsForClosers #Painthammer2020 @jewelknightjess

And finally I painted a set of Sector Sanctoris Ruins to use as scatter terrain.

I am now working on the bigger building in this box and they hopefully will get done this week.

As I said before my current painting plan is suspended until after Company of Legends and even then it will be suspended until I get back from EGX Rezzed, but here it is anyway.

What I Am Reading

I finished The First Wall and I enjoyed it, it was really good, I know others have given it mixed reviews but I really got into the story of the Imperial Guard and their conclusion really felt like a stab to the guts.

I absolutely would recommend it, and I am going to listen to it on audiobook as soon as I can.

I went to Meeple Perk, my local board game cafe on Friday night with Megan, Lindsay and our friend Jo, and we played a few games.

We started off with a game of Just One, in which we scored 11 points which we were really happy with.

And then we played three games of Codenames Disney, we all lost the first one when Lindsays first clue lead Jo right to the assassin and me and Megan won the last game together.

Then on Sunday we went to Paul and Mary’s house where we played three rounds of Telestrations, which was very very funny, and then two rounds of Just One, before we headed out to tea and returned home for a game of

What Am I Backing

What Am I Cooking

I helped to makes some breakfast sandwiches on Sunday.

Breakfast this morning was a bun with Kansas City BBQ pulled chicken, streaky bacon, cheese slices and a fried egg. Very nice, want to try this but with pork instead of chicken. #BBQPulledChicken #KansasCityBBQ #PulledChicken #FriedEgg #Breakfast

They had in them, BBQ shredded chicken, in my Kansas City BBQ sauce, topped with some streaky bacon and a cheese slice and a fried egg.

What Am I Spending

The next two lots of my Black Library Celebration/Store blowout arrived! The first was a Nemisis Warbring Titan for Adeptus Titanicus and Traitor Command and The Deaded Ambull for Blackstone Fortress.

And the next batch was the Adeptus Titanicus Command Terminals, two sets of Custodes Dice, Valerian and Aleya, Larissa Shadowstalker, Sgt Jovan, a backpack, art prints, plasma gun ammo tin and a couple of paints.

I still have one more delivery to come which was dispatched today so I expect it either tomorrow or Wednesday.